When we think about the role of vitamin K in our bodies, many of us probably think back to the old definition we were taught in health class: it’s responsible for blood clotting.

Sure, that may be true, but this definition vastly underplays vitamin K’s many other jobs.

Evolving research shows there’s more to this vitamin than we think. It’s critical for building strong bones and teeth, and it helps prevent the buildup of plaque in the arteries.

During a recent podcast episode with my dear friend, Chris Kresser, he told me that vitamin K is one of the most common—and overlooked—nutrient deficiencies today, and specifically a form of vitamin K known as vitamin K2.

Today, we’re talking about all things vitamin K2 because it is the form that tends to be the most forgotten. We’re discussing what it does, what the research says about its benefits, and how to make sure you’re getting enough of it in your diet.

A Quick Note About Vitamin K and Its Different Forms

When people talk about “vitamin K,” they are typically referring to vitamin K1, the most commonly consumed form in the Western diet.

Vitamin K1 is found in leafy green vegetables like collard greens, kale, and spinach. This is the form of vitamin K responsible for blood clotting—what vitamin K is most famous for—but this is only the beginning of what vitamin K does in the body.

Vitamin K2 has an interesting history. It is believed that vitamin K2 was first discovered by an early 19th-century dentist, Weston A. Price, who discovered a link between a missing nutrient in Westerners’ diets and the degeneration of their teeth and a narrowing jawline.

Price traveled to indigenous populations and found these people did not have the same narrowing jaw lines and tooth decay as Westerners did. He believed the shift away from our ancestral diets toward starch and grains was primarily to blame.

He named this mysterious missing nutrient “Activator X” because he believed it was necessary for the mineralization of our bones, jaws, and teeth. “Activator X” was later named vitamin K2, or menaquinone (MK), by scientists and is primarily found in foods that were staples of our traditional diets: animal foods and fermented foods.

Take a look at the photos below from Weston A. Price’s research. The people on the left are from indigenous cultures that followed their ancestral diet. Notice how they have jaws that are wide enough to fit their teeth. Compare these to the pictures on the right, which show Westerners with underdeveloped jaws and crowded teeth. 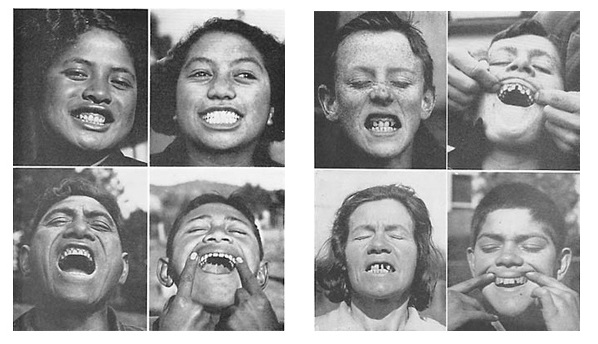 What Does the Research Say about Vitamin K2?

The early research of Price inspired future research that established the critical role vitamin K2 plays in calcium metabolism. Now we know for sure that vitamin K2 helps deposit and keep calcium in our bones and teeth instead of being deposited into places where it doesn’t belong, like our arteries and soft tissue.

It makes sense, then, why people who eat more foods rich in vitamin K2 are at a lower risk of heart disease—they have less plaque buildup in their arteries and brains (1).

There’s no doubt vitamin K2 is a super-nutrient for our heart, bones, and overall health. But that’s not where the K2 conversation ends. It’s important to note that vitamin K2 comes in many different forms, and each serves its own unique benefits. Today, I want to talk to you about the two main forms, MK-4 and MK-7.

MK-4 is the form of vitamin K2 found in animal products—mainly dairy, chicken, butter, and eggs. It is quickly absorbed, it beneficially modulates gene expression and sex hormones, and it even protects against cancer (6).

The most widely researched form of vitamin K2, MK-7, is found in fermented foods (7). MK-7 has a wide range of functions but is best for stimulating the production of osteocalcin, a protein involved in building strong bones and teeth (8).

When people ask me what supplement has made the most noticeable impact on my sleep, energy, and overall health, my go-to answer is magnesium.

Why magnesium? Well, this super mineral is involved in everything from energy production to DNA repair to vitamin D activation to hormone production, and more—you name it, magnesium plays a role.

But it’s almost impossible to get enough magnesium from food these days, and with so many people getting less than the recommended daily amount, supplementation is critical for preventing deficiencies.

I’ve tried a lot of different magnesium supplements over the years, and BiOptimizers Magnesium Breakthrough is my absolute favorite. I recommend it to everyone because it’s the only supplement that covers all of your magnesium bases. It contains seven different forms of magnesium, which all serve unique functions in the body.

Right now, you can get Magnesium Breakthrough supplements for 10% off! And for a limited time, BiOptimizers is offering my community free bonus gifts when you order a three, six, and twelve months supply!

Mounds of research clearly show the importance of vitamin K2 for cardiovascular and bone health, and yet the dietary guidelines have not been updated for over 20 years. Scientists are currently working hard to give vitamin K2 its own RDA.

The RDA for vitamin K (120 mcg for men, 90 mcg for women) doesn’t recognize the differences between vitamin K1 and K2.

Part of the reason for this is because the bacteria in our gut convert vitamin K1 into vitamin K2, and since vitamin K1 is the main source of vitamin K in people’s diets, it’s assumed that it covers all of our vitamin K bases….

Buuuut, it’s not that simple!

Converting Vitamin K1 to K2: What Gets in the Way

Our gut bacteria can convert vitamin K1 into vitamin K2, but some things get in the way.

Firstly, the vitamin K2 produced by bacteria has a low absorption rate, so the amount that the body can actually use isn’t optimal (9). Secondly, cholesterol-lowering drugs and blood thinners can inhibit the conversion of K1 into K2.

Alright, now that we know the importance of vitamin K2 and its different forms, how do we get enough in our diets? Let’s answer that question in today’s protocol.

A food-first approach is always preferred because it contains the synergy of other vitamins, minerals, and enzymes that work together for optimal absorption. Here are some foods that can help you reach your vitamin K2 goal:

2. Take a vitamin K2 supplement. If you’re not getting enough vitamin K2 in your diet, supplementing with vitamin K2 could provide benefits, especially for people at risk for heart disease or osteoporosis or who have tooth decay. Look for a supplement that contains MK-7 or a mix of MK-4 and MK-7.

Note: If you’re on a blood thinning medication, vitamin K2 supplements are known to interact with this medication and should be avoided. A balanced, food-first approach is likely a safer option, but always talk to your doctor first before making changes to your diet and supplement regimen.

I always like to look for the counterarguments that are out there, and nutritionist Simon Hill is someone I admire who takes a plant-based approach.

Simon believes that a healthy body can produce enough vitamin K2 and doesn’t think supplementing is necessary if you’re avoiding animal products. For those following a vegan or plant-based diet, you can read more about Simon Hill’s views on vitamin K2 and other essential nutrients with this free Supplement Guide.