This week, I’m excited to share with you my list of the top three most-underrated herbs and spices, why they are so beneficial, and how to incorporate them into your life to experience their insane healing effects.

What kind of benefits am I talking about?

I added “underrated” to the title of this blog because there is plenty of content out there on the power of spices. The classic ones like turmeric, ginger, and garlic seem to get all the love—and yes, it’s well deserved. They have mounds of research behind them that continually prove their therapeutic value.

Today, however, I wanted to shine the spotlight on three spices that don’t always make it to the mainstream like their famous counterparts do, despite the fact that these herbs and spices also have a ton of research that supports their healing properties.

You’ll probably notice that my top three spices are not only easy to get, but there’s a good chance that you might already have them in your pantry.

I. Rosemary. Rosemary’s impressive profile of healing benefits are linked to its potent bioactive polyphenol known as rosmarinic acid.

Studies show that rosemary can inhibit cancer cell proliferation (1)(2) and has anti-inflammatory, cardioprotective, anti-aging, antimicrobial, and antidepressant effects (3). Rosemary also blocks pro-inflammatory pathways, supports the immune system, and improves digestion and circulation in the body and brain, which can help enhance concentration and focus (4).

The majority of the studies that use rosemary are in vitro, so it’s hard to extrapolate an exact dose in humans. One study, however, found that ingesting 500mg of rosemary (about half a teaspoon) twice daily (one teaspoon total) for a month significantly improved memory, reduced anxiety and depression, and enhanced sleep quality in university students (5). If you aren’t already using rosemary, even shooting for a few teaspoons a week could be beneficial.

I thought I knew a lot about rosemary, but when I read this review paper titled Therapeutic Potential of Rosmarinic Acid: A Comprehensive Review, I was completely blown away by the list of healing effects it had to offer. That’s why I’m listing rosemary as my first most-underrated herb.

Here is a powerful image from the review paper of everything rosmarinic acid has been shown to improve: 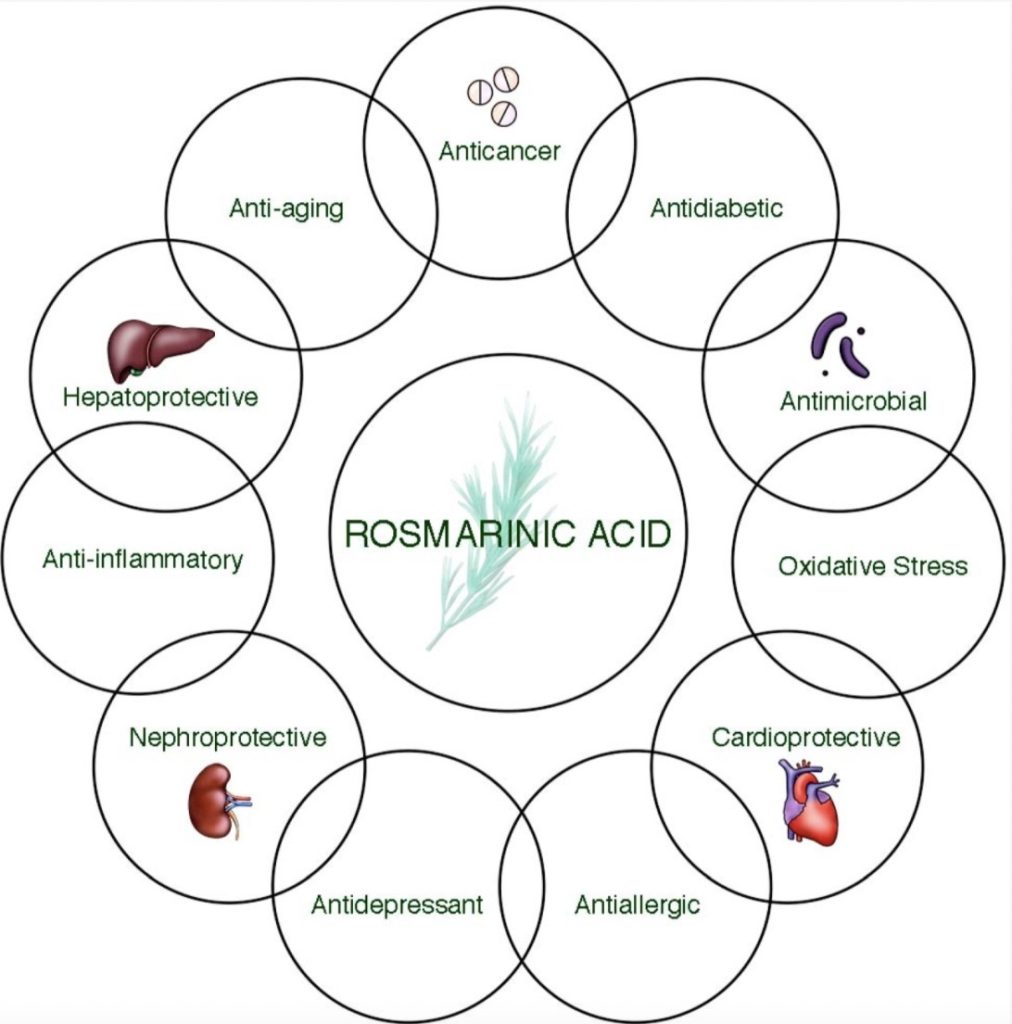 II. Oregano. Here’s a mind-blowing fact about oregano that will give some context around why I’ve included it as the second most-underrated herb or spice:

Oregano has the highest antioxidant activity of any herb—approximately four times as much as blueberries (4)!

This makes oregano helpful for inflammatory conditions like depression, diabetes, rheumatoid arthritis, and headaches (7). Oregano also protects against cancer because it helps prevent DNA damage due to oxidative stress.

In addition to its high antioxidant potential, oregano oil has been studied for its anti-pathogenic properties. It is antibacterial, antiviral, and antifungal, and it’s effective for treating Candida albicans overgrowth, a fungus that feeds on excess refined carbs and sugar in the diet (8)(9). This is why so many functional medicine doctors, not to mention supplement companies, use oregano oil as part of their gut-healing protocol.

Pro tip: add oregano towards the end of cooking or use it as a garnish to ensure it retains its polyphenols, since heat can reduce its medicinal value (4).

Cinnamon also has antioxidant, antimicrobial, anticancer, and cardioprotective properties (13). Studies have also shown that cinnamon could help prevent cognitive decline by enhancing insulin sensitivity and reducing plaque buildup in the brain, which is associated with Alzheimer’s and Parkinson’s disease (13)(14).

The spice rack in your kitchen is like your own little mini-pharmacy—except it tastes and smells amazing.

We know that eating a variety of plant foods is linked to a more diverse gut microbiome, which is associated with less risk of chronic disease and greater overall health and longevity. But what we don’t talk about enough is the fact that including more spices in our diet is one of the simplest ways to achieve this variety.

As always, my goal for this newsletter was to introduce a quick and easy way to take your health to the next level. Let me know if today’s Try This inspired you to add a little more spice to your life using the feedback feature below!