More and more evidence is showing a link between artificial colors and mood and behavioral challenges in kids. But do you know what’s even more concerning?

Consumption of artificial dyes has increased by nearly 500 percent in the past 50 years, and children are the biggest population of consumers (1).

If you have young kids in your life who are showing signs of ADHD, aggressive outbursts, or unexplained mood swings, it’s important to know that artificial colors could be a possible trigger.

Today, I’m sharing some research and real-life anecdotes that give reason to suspect that artificial dyes may be troublesome for some kids and what you can start doing right now to get them out of their diet.

This newsletter is for parents, grandparents, teachers, caregivers, or anyone who has a child in their life. But before we jump in, I want to give some love to today’s sponsor, Inside Tracker.

If you asked a random person on the street if they follow a healthy diet, they would probably say yes. But with 88 percent of the population being metabolically unhealthy, how can we really know for sure that their dietary approach is working?

The only way we can answer that question with confidence is to get regular lab work done.

Thankfully, companies like InsideTracker make it easy to know where your metabolic health stands.

With InsideTracker’s Ultimate Plan, you can measure 43 biomarkers, including HbA1c, glucose, triglycerides, and total cholesterol. They even test biomarkers like vitamin D and magnesium that aren’t included on standard lab tests but directly impact our metabolic health.

And it’s one thing to get your lab work done, but it’s another to translate those results into diet and lifestyle changes. Let InsideTracker do the work for you!

InsideTracker will give you a personalized nutrition, exercise, and lifestyle plan based on your labs, DNA, and personal preferences.

Right now, InsideTracker is offering my Try This community 20% off. Just click this link and use the code DHRU20 at checkout.

Alright, let’s jump in by answering this super important question:

Why Are Artificial Dyes Such a Problem?

Artificial dyes are made from the process of cracking crude oil (a.k.a. petroleum—yuck!!). These synthetic colors give processed foods their bright colors, but research shows they can come with unintended—and potentially harmful—consequences.

For example, three of the most commonly used artificial food dyes—Red Dye No. 3, Yellow 5, and Yellow 6—are xenoestrogens (2)(3), which means they replicate estrogen-like activities in the body. Estrogen-mimicking chemicals are linked to health concerns such as weight gain, hormonal imbalances, and early puberty in boys and girls (4)(5).

Toxicology reports show that these artificial dyes can also be contaminated with carcinogens (6), and they have been linked to DNA damage, inflammation, migraines, allergies, and certain types of cancer (2)(7)(8).

But their impact on the brain, especially kids’ developing brains, is especially concerning.

Artificial Dyes and Their Impact on Developing Brains

Last year, the California Office of Environmental Health Hazard Assessment (OEHHA) published a report based on their review of the research stating there was significant evidence of an association between artificial food dyes and adverse behavioral outcomes in children (8).

Here’s a quote from the Environmental Working Group (EWG) that summarizes the report’s biggest takeaway:

“OEHHA’s report concluded that human studies show that dyes are associated with inattentiveness, hyperactivity, and restlessness in sensitive children.”

The key thing to note here is that not all children are negatively impacted by synthetic food dyes; it’s just those who are sensitive.

However, the rate of ADHD diagnoses has nearly doubled in children in the US over the past 20 years (10), and even though this isn’t entirely related to food dyes, researchers do estimate that about 8 percent of children’s cases can be related to artificial food colors (11).

Another study published in the prestigious journal The Lancet randomly assigned a group of nearly 300 kids who were three, eight, and nine years old to drink a beverage that contained artificial food coloring and sodium benzoate (a preservative) or a placebo (12). The drinks with artificial dyes and preservatives significantly increased hyperactivity across all three age groups.

Despite the growing evidence, failure to implement policy changes means manufacturers are still using synthetic food dyes, and they aren’t planning on cutting down anytime soon. Believe it or not, their use is actually increasing. And the worst part is the kids who are most sensitive to their neurobehavioral effects are getting the brunt of it.

One study found that just one milligram of Yellow 5 is enough to trigger symptoms in sensitive kids (13). Compare this to a serving of Lemon-Lime Gatorade, which has triple that amount, a serving of Sunny D, which has 20 times that amount, or the icing on a birthday cake, which can have up to 50mg of total artificial dyes.

These foods and beverages are staples in a lot of kids’ diets these days—but at what cost?

An Anecdotal Story about the Harmful Effects of Artificial Food Dyes

Dr. Rebecca Bevans, a doctor of clinical psychology, talks about the severe impact artificial food dyes had on her seven-year-old son’s mental and behavioral health in her TED Talk, The Effects of Artificial Food Dyes.

Through her own research, she found that Red Dye No. 40 was linked to her son’s hyperactivity, “brain buzzing,” and impulsiveness symptoms, which were similar to ADHD. After eliminating Red 40 from her son’s diet for two weeks, his symptoms completely went away.

She also found a connection between other food dyes and symptoms in her son. Below you will find a list of symptoms and the specific food dyes she traced them back to.

Before you read through the table, I want to point out that this should not be mistaken for clinically backed evidence that can be applied to all children. My intention in including it is so that you can begin down the path of exploring the potential link between artificial dyes and behavioral challenges in kids. 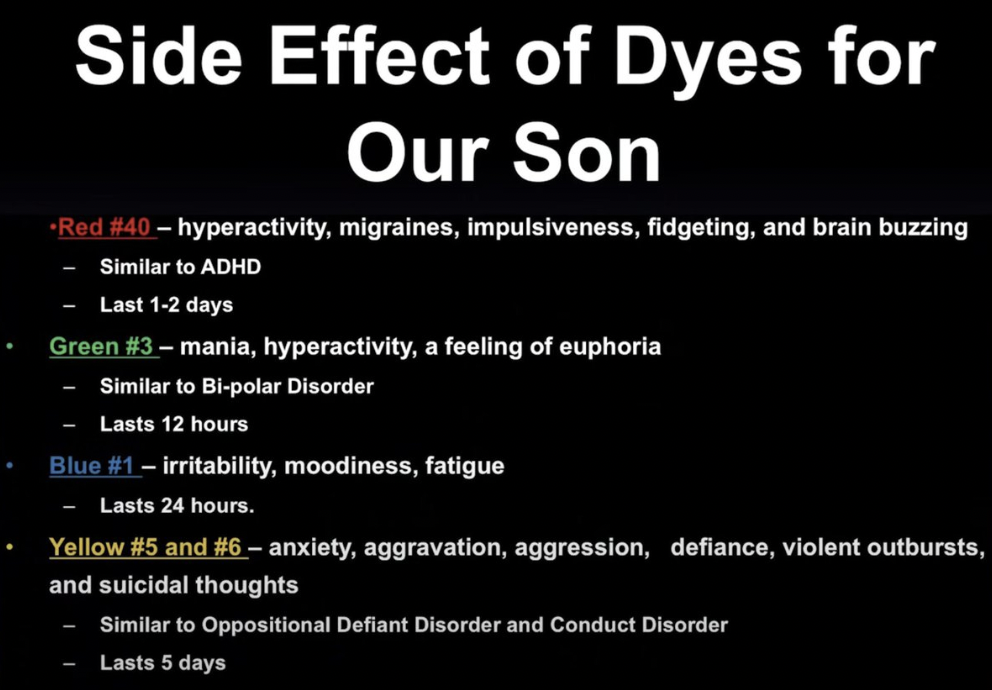 Now that we’re aware of the impact artificial dyes can have on children who are sensitive to them, let’s talk about how we can protect them. Remember, it’s not about being perfect; it’s about having the awareness and being able to identify the link.

I love this first tip and was excited to include it as my first recommendation because, the truth is, artificial dyes are everywhere! They are so ubiquitous in our food supply that it’s hard to tell if they’re causing behavioral issues without completely eliminating them from your child’s diet.

The effects of artificial dyes on our children’s brains is super concerning. Thankfully, there are some Big Food companies that are waking up to these dangers and taking strides to replace the artificial dyes in their products marketed to kids with natural, whole foods-based dyes like turmeric, beets, and carrots.

We’re all doing the best we can, and this is just another cog in the wheel of why processed foods are so dangerous and detrimental to our health. My hope in sharing this information today is that it can help draw attention to the link between artificial dyes and behavioral health in sensitive kids.